One Saturday afternoon, my friends and I decided to have lunch at Passion Restaurant in Resorts World Manila. We were famished because we had just gotten off a Cebu Pacific flight from Hong Kong. If you’ve been on a Cebu Pacific flight before, you’d know that they don’t really serve food. All they have are junk food, instant noodles, and breads priced at P50 – P100 each. Resorts World Manila was close to the NAIA 3 so that was where we ended up. 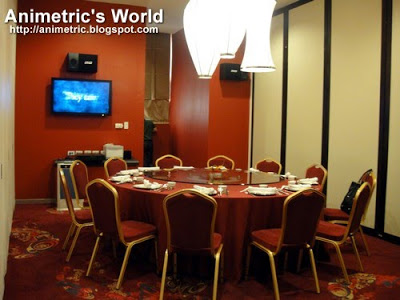 Since there were ten of us, we decided to get a function room. It comes with its own LCD TV, speakers, and rest room too. Theoretically you can have a karaoke session here, but the servers told us the system wasn’t quite ready. 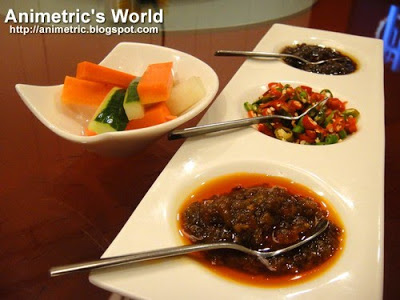 We were served pickled vegetables as appetizers while we browsed through the menu. I was amused by the rectangular plate containing three different condiments: chili sauce, minced chili peppers, and XO sauce. We finally decided to order the set menu for six (6) people. We just ordered about three other dishes so it would be enough for all of us… and it was. 🙂 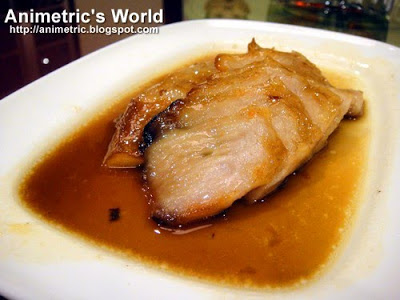 Barbecued Pork with Honey Sauce is the smallest dish in the set. It’s served in soy-based sauce. The meat is kind of fatty although it’s not really fat… wait, did that make sense? Let’s just say it’s meat but it’s like fat. 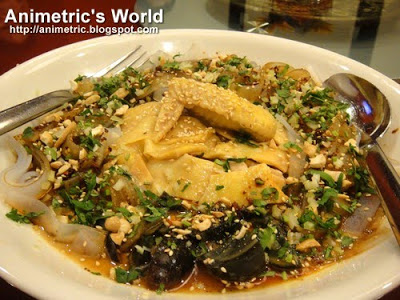 Szechuan Sauce Chicken was pretty exotic. When you say szechuan, I expect something reddish and spicy, perhaps with some cashew nuts. Instead we got what seemed like steamed white chicken served with sesame-based sauce, lots of century egg wedges, chopped peanuts, and minced green onions with parsley. Nice, but I’m not fond of chicken. :p 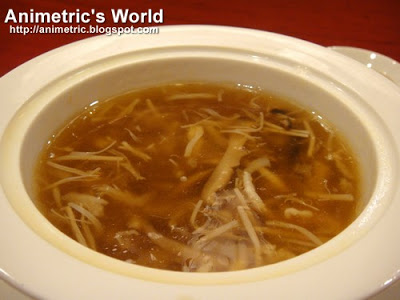 Shark’s Fin Soup with Shredded Abalone and Dried Seafood is the typical shark’s fin soup. I like having it with a light drizzling of black vinegar. 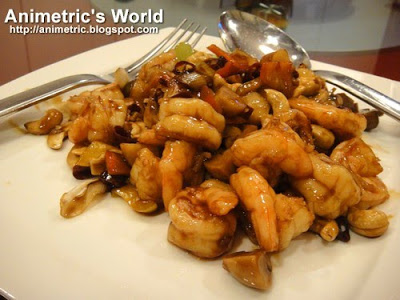 Stir Fried Shrimp “Kung Po” Style struck me as szechuan shrimp with its slightly spicy sauce, mushrooms, and cashew nuts. Yummy… even if I am allergic, I just had to have some. 😀 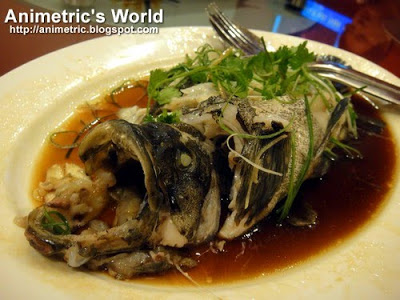 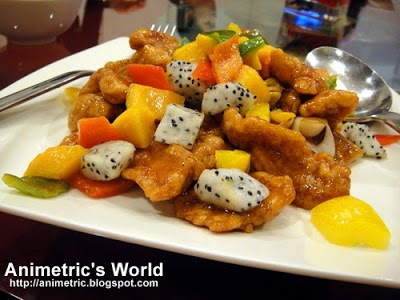 Stir Fried Sweet and Sour Pork with Fresh Fruits was a delight. It had cubed dragon fruit and mangoes instead of the usual pineapple tidbits. The pork was lean and crispy too. 😀 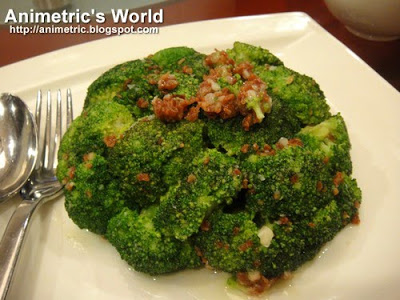 Wok Fried Minced Bacon and Garlic with Broccoli was okay… I think I just had the bacon. :p 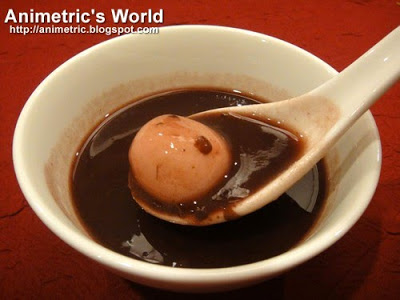 Last but not least is dessert — Hot Red Bean Cream with Glutinous Dumpling. I actually liked it a lot as it was nice, warm, and comforting. It’s not too sweet too so it was just perfect. The glutinous dumpling is filled with monggo.

All the dishes were quite good, but my favorites are the Stir Fried Shrimp “Kung Po” Style, Stir Fried Sweet and Sour Pork with Fresh Fruits, and the dessert Hot Red Bean Cream with Glutinous Dumpling. Service was superb. The servers were very courteous and attentive, we were amused that they kept replying to us with “Certainly”. 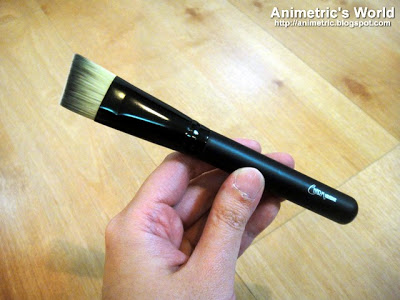