How to get your kids (or maybe yourself) into modeling

Roughly about five years or so ago (seems like eons away now), I was very active in the magazine circuit — not as a writer at first, but as a contestant to the various promos and giveaways being held especially by Summit Media’s magazines. I became part of a stagemoms group on the now defunct Multiply. Apparently, there were (and still are) a lot of stagemoms who want to get their kids in the limelight. It was an active forum where we shared tips, casting calls, contact persons, experiences, and lots more. We also posted a lot on the Girl Talk forum where there was a thread dedicated to the topic. 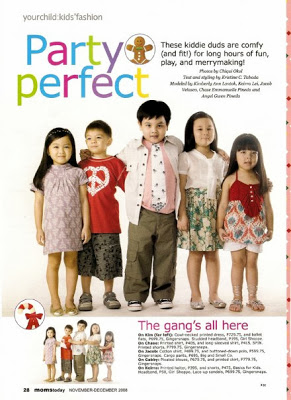 Both my kids were totally uninterested in modelling… as in totally. It was a daunting task just to make them smile for family photos, so what more for something like this, right? But like most mothers out there, I believed they had it in them so I gave it some effort. We did have a bit of success and my kids did appear in a few magazine spreads (some with talent fee) but we didn’t have it in us to attend VTRs and casting calls because I could not subject them to the long lines, endless waiting, and well… I knew no matter what I did I would never be able to make them act in front of a camera. After a couple of print gigs my kids didn’t want to do it anymore, lol. So we stopped. There were kids who got big breaks. There were those who got print ads, TVCs, etc. The child star Jillian Ward is probably the best example. She started out in the same group. Her mom was really really active in looking out for opportunities where Jillian could participate. Eventually she moved on to become an Osh Kosh model and well look where she is now… 🙂 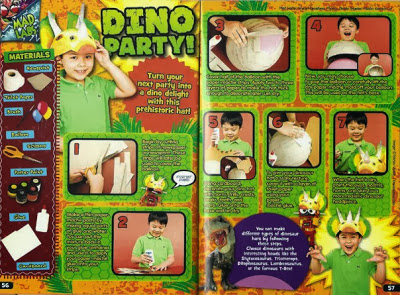 Tip #1: Join photo contests. Doesn’t matter where — it can be a magazine, newspaper, TV, mall, Facebook, etc. contest. Exposure is one of the ways to get a child noticed. I know some kids who eventually landed TVC roles and print ads and they started out with photo contests. Brand people skimming through magazines and papers notice kids who stand out from time to time. Then they will ask the magazine for the contact details of the kid because they like him or her. Yes, it has happened to moms and kids I know personally. Of course if you are joining, careerin na — meaning put your best photos forward! 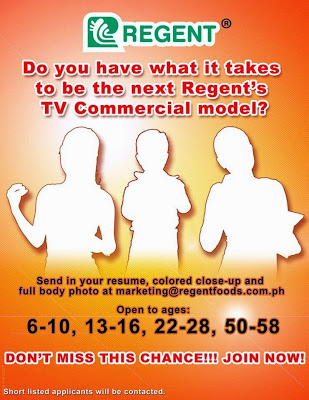 Tip #2: Keep an eye out for model searches. There are a lot now, especially on Facebook. Brands are always looking for new faces. In fact, I saw that poster above in Regent Foods’ Facebook Page. Brands like Mossimo, Pink Box, and the like hold go-sees and announce it on their Facebook Pages from time to time. Follow brands who would usually need child models so you will be in the loop when they start looking. I know for a fact that whenever Philippine Fashion Week draws near, SM is always looking for kiddie models for the SM Kids fashion shows. 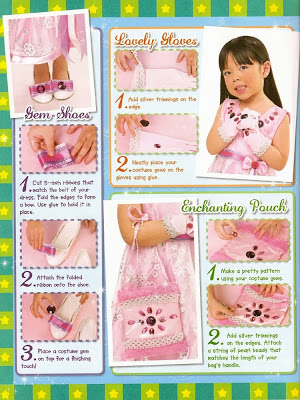 Tip #3: I would tell you to join an online forum with like-minded moms much like the Girl Talk Stagemoms group I joined before unfortunately I don’t know where to refer you to. I tried looking for it now and it seems defunct as Femalenetwork seems to have revamped their forums. What happened was fellow stagemoms would keep each other informed of various opportunities and then share with the group.

Tip #4: Inquire at a modeling agency. Call them and tell them that you want your child to be part of their talent roster or something like that. Ask them for requirements, if any. I personally have not done this because wild horses couldn’t drag my children to a VTR session or go-see. You can check this list of Philippine-based modeling agencies I found online. I can’t vouch for any of them so proceed with caution. I have friends who are managed by specific agencies and they get projects from time to time.

Yes, I got our entire family a TVC gig from an international photo and writing contest conducted by Discovery Channel Asia.

Tip #5: Make sure your child really wants to do it. It’s going to be a nightmare if you’re going to force them into it because kids can be very uncooperative especially when they don’t like what they’re doing.

If you think about it, anyone can be a model. We always think that they’re looking for those fair, tisoy/tisay types but try watching some TV and you’ll also see lots of regular Filipino-looking looking folks in TVCs because hey, we live in the Philippines and it won’t be very relevant if all the TVCs would feature light-haired light-eyed people who look like foreigners. Of course there are basic criteria like good skin, good teeth, and so forth but as for a particular look, anything is possible. This is not to say that everyone who exerts all possible efforts will get results. I know of moms and kids who have gone to countless go-sees and VTRs but never got so much as an extra part. It’s really anyone’s ball game and there are no guarantees. You just have to be prepared to accept the results.