A little more than a couple of weeks ago, I looked in the mirror and decided to get a haircut. Almost one year has passed since I got my hair magnetically straightened at Shuji Kida Salon and it was getting to be a pain to dry since it’s not only long but thick.

Luckily, I won in Eastwood City’s contest and part of the prize was a free haircut and hot oil treatment at Azta Urban Salon.

Azta Urban Salon GCs work a bit differently. You will have to text Meg at the number indicated on the card in order to set an appointment for the service you’ll be availing of. I texted her that I wanted to avail of a haircut and hot oil treatment at the Eastwood branch. I also indicated my preferred time. She replied less than 5 minutes later that she would set it up with the branch and then text me when my appointment is confirmed. You can only use GCs from Monday to Thursday of any week so I went on a weekday.

My appointment was confirmed and I went straight to Azta Urban Salon’s branch at the Eastwood Citywalk. I liked the interiors, it was uncluttered, clean, and spacious. The air-conditioning is great — it was very hot outside but it was comfortably cold inside the salon.

Surprisingly, they told me to get the hot oil treatment done first. You’d think they’d want to cut my hair first so that they’d end up using less treatment solution, but no they said the hot oil treatment comes first. They massaged the hot oil treatment onto my hair and scalp then wrapped it in clear cellophane. After some period of time, my hair was rinsed and then cut. I told the stylist I just wanted a straight and even cut since I was planning to undergo Japanese straightening again in the coming days.

…and this is the result of my simple, plain, and even cut plus blowdry from Azta Urban Salon. The softening and shine-inducing effect of their hot oil treatment actually lasts for several days, our office staff were actually complimenting me some 2-3 days after.

A haircut at Azta Urban Salon costs P250, while a hot oil treatment’s price would depend on how long and thick your hair is. I was quoted P600 for my original hair length at the topmost photo of this blog entry.
Azta Urban Salon
2/F Eastwood Citywalk 2
Eastwood City, Libis, Quezon City
687-6527
Like this post? Subscribe to this blog by clicking HERE.
Become a Facebook Fan for more updates from Animetric’s World.
Like 0
Share: or Comment
azta urban salonbeautyeastwood cityeastwood citywalk 2hairhaircuthot oil treatmentsalonservice 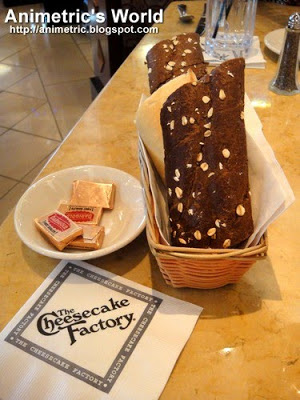 The Cheesecake Factory in California, USA

My daughter’s best gift ever!